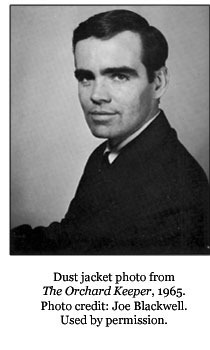 Since reading The Road earlier this year I’ve been looking forward to reading more McCarthy. I wanted to get more of a feel for his style before hitting his more prominent works so I figured why not start with his first. I happened to read it around the same time as I read In Dubious Battle, which was interesting because both include Orchards in some way, although they are wildly different. The Orchard Keeper, published in 1965, tells the story from three different perspectives. Set in a small town in Tennessee, these three people all become intertwined in a murder that occurs early on. The characters and their families cross paths leading to a wild and violent climax.

Let me start by saying that I was quickly mesmerized by the writing. It’s dark, atmospheric, and razor sharp. It just exudes an atmosphere that is so captivating. As someone who loves descriptions of nature and surroundings, I loved the wide array of descriptions in this book. There are several parts where Cormac describes the changing of seasons that are simply glorious. I could picture everything so clearly, including the bone-chilling violence that comes with it. It’s crazy that this was Cormac’s first published piece of writing. He has this knack of using words in which I don’t know the meaning, yet by placing them so precisely in a sentence it can be assumed what the word means before even looking it up.

Though the prose and all was great, the story itself I really struggled with. It was very hard to follow because it jumps all over the place and by the end when I could start piecing things together I lost the emotional impact the book may have had on me. Many of the scenes are very memorable, but they were never fully cohesive for me. I think a reread would be necessary for me to understand the core message behind the book and how the multiple storylines tie together. It was really the writing that carried my experience and got me excited to read more by Cormac. It’s not fair to compare it to The Road because this is his first novel whereas The Road is his last, but you can tell its rawer and not as finely tuned. That or maybe the nonlinear story just baffled me. He seemed to have been able to show off a bit more with this one while The Road was carefully structured in a way that wastes no space. The Orchard Keeper is not as fast-paced either, so the urge to keep the book open is not as strong. I did enjoy this for the most part and a second read would likely improve my experience, but I’m anxious to see what else he has in store for me before I return to this one.