In Dubious Battle is a solid book. It’s Steinbeck’s first full-length novel considering the others up to this point are more like novellas. What I enjoyed about this one is that Steinbeck’s straightforward storytelling ability shines through. He doesn’t do anything fancy but his writing is effective. The novel is easy to get into and each scene is crystal clear. It’s one of those that I imagined could be made into a film, which I found out it was in 2016 directed by James Franco. It’s fast-paced for Steinbeck standards, has a distinct atmosphere, and has enough memorable scenes to translate to the big screen. Of Mice and Men features these same characteristics. In Dubious Battle takes place during the dust bowl and is bolstered by two male leads, also in line with Of Mice and Men. I wonder if aspects of In Dubious Battle inspired Of Mice and Men considering all the factors that align so closely. It also generates an emotional response from the reader, one of anger and frustration, which builds throughout. I would argue it’s his first book that successfully generates these emotions in a serious, non-satirical manner. It’s almost like witnessing him discover this sweet spot that readers adore in his later work.

In Dubious Battle also differs from his other books up to this point because it has a political side to it in which he addresses communism in a multitude of ways. This is symbolized through the story rather than adding a separate political dialogue, so I didn’t find it to be invasive. The story is about a group of orchard pickers who go on strike and seek other’s to fight for their cause. It doesn’t sound all that exciting, but trust me when I say this — things happen. I thought it was enjoyable but I doubt it will remain in my mind for years to come. Mac and Jim were especially interesting character studies so I wouldn’t hesitate to recommend this to other Steinbeck fans. 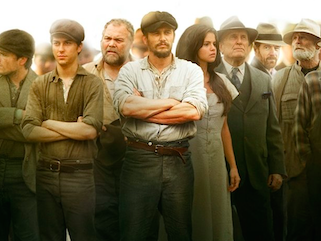 From 2016 film adaptation which I have not seen