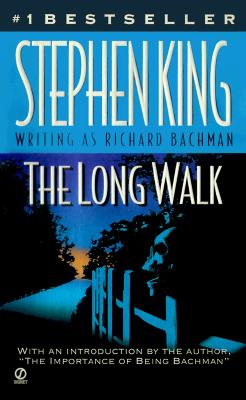 My feet hurt. A thriller in every sense of the word. A dark, sadistic, excruciating, psychological thriller.

100 teenage boys are invited to compete in the annual Long Walk in an alternative, dystopian America. It is the largest event in the country and everyone will be watching. The participants must maintain a speed of at least 4 mph and follow all other rules throughout the hundreds of miles or they receive a warning. 3 warnings are the limit. Any more than that and the participants get a ticket — a terrifying withdrawal from the race. They regain 1 warning for each hour that passes but retain no more than 3 warnings. The first to the finish line or the last man standing receives an unknown prize.

Stephen King, under the pseudonym Richard Bachman, keeps the reader in the dark, both literally and figuratively. He reveals nothing. I liked this clever suspense, but I craved more answers the entire time. Why are the boys signing up for this knowing what it is? Why are they not more prepared? Why did they bring only the strangest food to eat? How are their parents letting them do this? Why are these kids talking with each other so damn much instead of gasping for air? When are they going to stop with their obnoxious, horny 16-year-old boy chatter? How is any of this humanly possible? What in the hell is the point of all this? The book focuses on primarily the walk only with the exception of stories and flashbacks from the participants. It involves some of the environment the walkers are in such as the road and surrounding crowd, but only relating directly to the walk. The world that they are living in and how it came about is not of importance to King. He gauges the book more towards the physical and, more importantly, the psychological struggle leading up to the long-awaited finish line. The vital question being, will any of the walkers be lucky enough to see it?

“It’s not survival of the physically fittest, that’s where I went wrong when I let myself get into this. If it was, I’d have a fair chance. But there are weak men who can lift cars if their wives are pinned underneath. The brain, Garraty.” McVries’s voice had dropped to a hoarse whisper. “It isn’t man or God. It’s something…in the brain.”