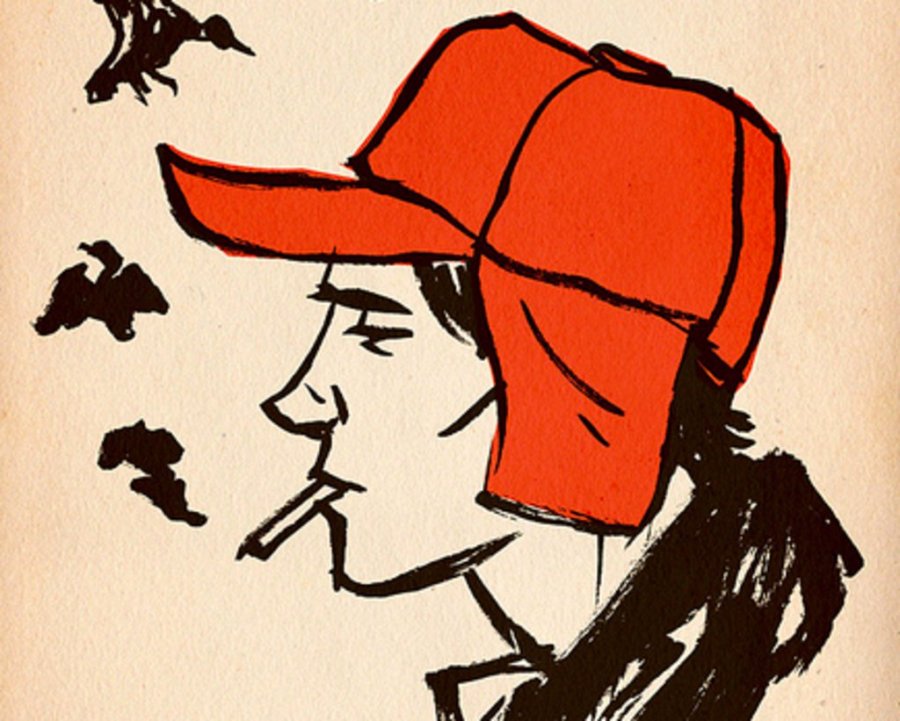 Holden, Holden, Holden. I wish I could share a smoke with this kid and tell him to chill out, it’s gonna be okay and just listen, something most people don’t seem to do. Just kidding, I don’t smoke. Anyway, I completely understand why The Catcher in the Rye is controversial. I understand why it is considered a classic. And I certainly understand why many people find Holden Caulfield intolerable.

What I came to understand pretty early on, this kid is pretty messed up. He is completely negative and judgemental towards the majority of things around him, likely in part from something that happened to him in his past. The most obvious, the story of his brother, which I won’t get into to avoid spoilers. Secondly, I sense he has an overwhelming amount of pressure from his parents. He’s terrified to go home (like live in a hotel for 5 days or move out west terrified) and face his parents after getting kicked out of yet another school. And the last thing I noticed, he mentions people trying to do perverted things to him in the past. Not sure what this means, but that never sounds good. He’s scared of growing up, he’s lonely, and he calls everyone phonies because he’s too depressed to find enjoyment in things anymore.

Personally, I was hooked from page one. I might be a sucker for coming of age stories and maybe Holden’s time in the dorm brought me back to my college days, but there’s something more there that really captured me. I can’t put my finger on it, but it probably has to do with the writing. I found a lot of what Holden had to say funny and sometimes true. Yeah, in many instances he was an asshole, but most of these occurrences were merely his cynical thoughts, not him actually acting out. The way he treated some of the people he went out with, namely Sally, are certainly condemnable, though. Most occurrences where he was actually acting out he showed some redeeming qualities. I started writing some of these down because they were usually blurred by all of his obnoxious rambling. I stopped doing this about 1/3 of the way through, however, because there was more than I expected. Some of the things I saw on Reddit made it seem like Holden was some sort of incredible monster. Here were some of these instances I noticed early on in the novel.

1. Holden writes a composition for his roommate Stradlater, who by the way is going on a date with Jane, a girl Holden is clearly interested in. Nevertheless, he takes the time to write it even though he is failing all of his own courses.
2. He lends his nice typewriter to someone down the hall, and instead of trying to get it back he uses Stradlater’s crappy one to write Stratlater’s assignment.
3. He constantly says he feels sorry for people and it makes him sad to think about it.
4. He is considerate enough to ask Ackley if he wants to join him and a friend at the movies, even though he knows this friend doesn’t like him. Holden says he “feels bad” for Ackley cause he stays in his room every night.
5. Holden says that he feels bad when people get him presents that he doesn’t like or it doesn’t fit. He doesn’t feel bad because he doesn’t get pleasure out of the gift, he feels bad because he pictures the other person going through a lot of trouble for it and wishes he liked it. Selfish people don’t think this way. He’s clearly a caring kid.

Other instances, later on, may include his relationship with his little sister, lunch with the nuns, or him playing with the kids in the museum, but I stopped keeping track.

Okay, enough with trying to make Holden a tolerable character. He is mostly intolerable. I get why people become annoyed with him and it turns them off to the book. But, I think that is the point of the whole thing. Salinger made him this way to make most people not want to listen to what he says. He writes Holden this way to show that a real life Holden would annoy people and deter them from helping a troubled kid because on the surface he seems spoiled or bratty or whatever. The brilliance of it is that it either connects with people or it doesn’t. And it can have an entirely different meaning when read at a different stage in a person’s life. If it does connect with the reader, it is a profound experience. This novel is an instant favorite of mine. I now can’t wait to read Franny and Zooey and Nine Stories.

“Among other things, you’ll find that you’re not the first person who was ever confused and frightened and even sickened by human behavior. You’re by no means alone on that score, you’ll be excited and stimulated to know. Many, many men have been just as troubled morally and spiritually as you are right now. Happily, some of them kept records of their troubles. You’ll learn from them—if you want to. Just as someday, if you have something to offer, someone will learn something from you. It’s a beautiful reciprocal arrangement. And it isn’t education. It’s history. It’s poetry.”